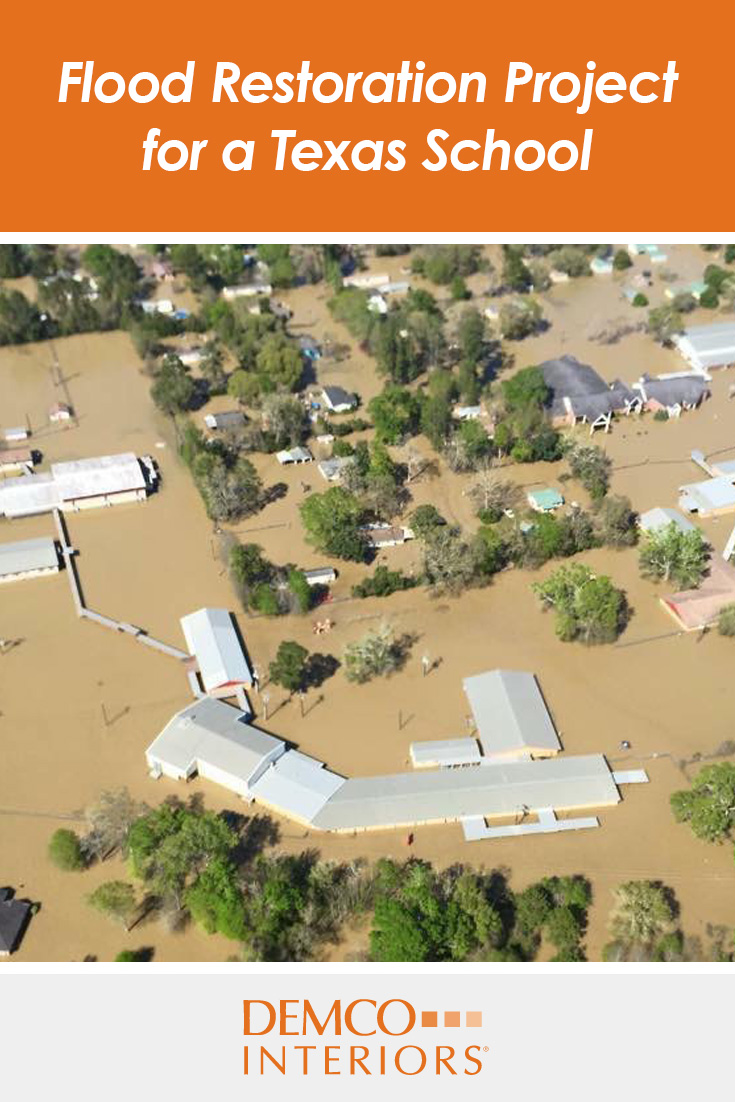 Home / How One Texas School Rebuilt After Catastrophic Flooding

How One Texas School Rebuilt After Catastrophic Flooding

Springtime in Southeastern Texas is known to be a bit stormy, but in 2016, the season brought unusually strong rainfall to the region. During the month of March, residents of the small town of Deweyville, Texas, endured almost a week of steady downpour.

With the massive amounts of rainfall, the nearby Sabine River reached levels unseen in the past 130 years, and water poured into the town, causing catastrophic damage to homes, schools and businesses. Officials declared a state of emergency for the area, and many of the 1,200 residents evacuated, leaving behind their flood-damaged belongings.

As the flood waters receded over the following weeks, the community was left to assess the extent of the damage. One of the most costly casualties turned out to be the town’s elementary school, which was a total loss of $12.5 million to the school district.

After a week of rain, Deweyville Elementary was left submerged in 4 feet of water.

Deweyville Elementary School Principal LaJuan Addison, her own home damaged by the flood, described the feelings of the community the first two weeks after the flood as “total shock.” With the elementary school submerged in 4 feet of water, 75% of staff members’ homes destroyed, and only $1 million in insurance coverage for the school, it was hard to imagine how they would even begin to rebuild.

The district’s first order of business would be to figure out where 350 elementary school kids would finish out the school year. Officials made plans to place the younger kids in temporary classrooms within the high school, including holding Pre-K classes in the teachers’ lounge and kindergarten classes in the gym. The community pulled together to ease the transition, said Addison, with older kids pitching in to help the younger students find their new classrooms.

With temporary classrooms squared away and FEMA funding in progress, plans for a more permanent solution began. Officials worked to design a 3- to 5-year solution: portable classrooms and administrative offices that would be located about 3 miles from the original elementary school site.

The design for the portable school units included features that would help foster a community learning environment. For PreK–3, each grade would be located adjacent to its partner classroom, with bathrooms between them; one large building would house administrative offices, the library, the computer lab and a large cafeteria; and another large building would include eight classrooms for the older kids. All of the portable structures would be connected by a raised walkway, ensuring a tight-knit campus community.

School officials knew they wanted to improve upon the interior of the old, outdated elementary school, but when it came to pricing out furniture, outfitting the new library, and filling the technology needs, said Addison, they grappled with not only figuring out everything they would need, but finding it all in one place.

Addison describes finding help with Demco as a “huge relief.” “They were wonderful,” said Addison. “We had been sending out for bids, but no one could do everything.”

The Demco interior services team headed to the site to measure and assess for furniture, storage and shelving needs, including student desks and chairs, mobile science tables and storage units, cubbies, activity tables, library shelving, a circulation desk and more.

“They helped us find the best prices and colors. We would just give a vague description, and they would find it and we would go with it,” said Addison.

FEMA funding covered much of the construction costs, but the school district was left to find additional funding for its everyday supply needs. A $5,000 donation from Demco, along with funds from the community, allowed the school to purchase more shelving, furniture, student supplies and teaching materials.

With the project team working hard through the summer, move-in was scheduled for August 2016, but was extended to September.

“We would not have been able to move in when we did had Demco interiors not helped us,” said Addison. “It’s 100 degrees, sometimes 106 here, plus the humidity level here is 85% — it’s a hot, sticky mess — and they came in to do the work before the electricity was turned on; they were awesome!”

The new Deweyville Elementary School opened its doors on September 12, 2016, and Addison has received great feedback from the community, including thank-you notes from kids talking about how beautiful the new school is. Parents and staff are loving the new learning environment as well. As the town enters its next stage of restoration, education in Deweyville will continue to thrive.

4 Ideas to Maximize the Benefits of Floor Seating